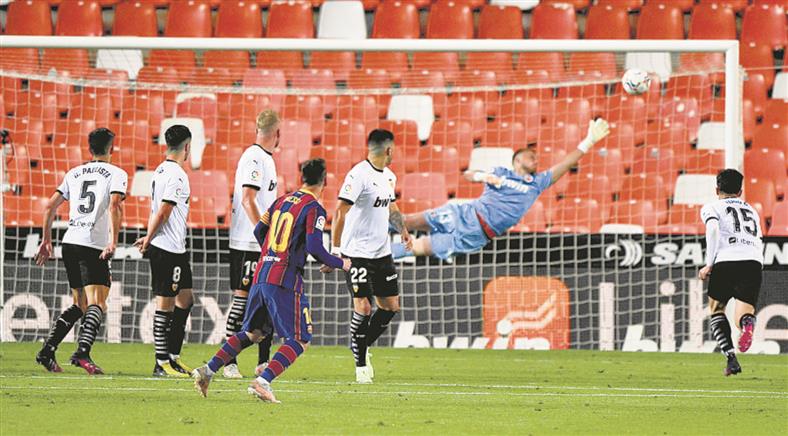 Messi scored two second-half goals on Sunday — including his 50th from a free kick — as Barcelona came from behind to beat Valencia 3-2 and get within two points of leaders Atletico Madrid ahead of their key match at the Camp Nou Stadium next weekend.

A win will give Ronald Koeman’s team the league lead for the first time this season.

Antoine Griezmann also scored for Barcelona, who are tied on points with second-placed Madrid with four rounds to go. Madrid have a better head-to-head tiebreaker against both rivals at the top. Sevilla also remain in the title race. They can move within three points of the lead if they beat Athletic Bilbao at home. Sevilla visit Madrid next weekend.

Barcelona made the trip to Valencia under pressure after both Atletico and Madrid won their matches on Saturday — Atletico edged Elche 1-0 and Madrid defeated Osasuna 2-0. The Catalans were coming off a shock 2-1 home loss to Granada on Thursday, when they could have grabbed sole possession of the lead.

“It was an important win to keep us in the fight after that unexpected loss,” Barcelona captain Gerard Pique said.

“We’ll try to win next weekend and take the lead. It’s in our hands.”

The pressure increased Sunday after Valencia opened the scoring at the Mestalla Stadium with Gabriel Paulista’s goal in the 50th minute. Messi led Barcelona’s recovery. The Argentina star equalised in the 57th. Griezmann netted the go-ahead goal six minutes later. Messi’s second goal came with a beautifully struck free kick that curled over the wall and hit the post before going into the net in the 69th. — AP