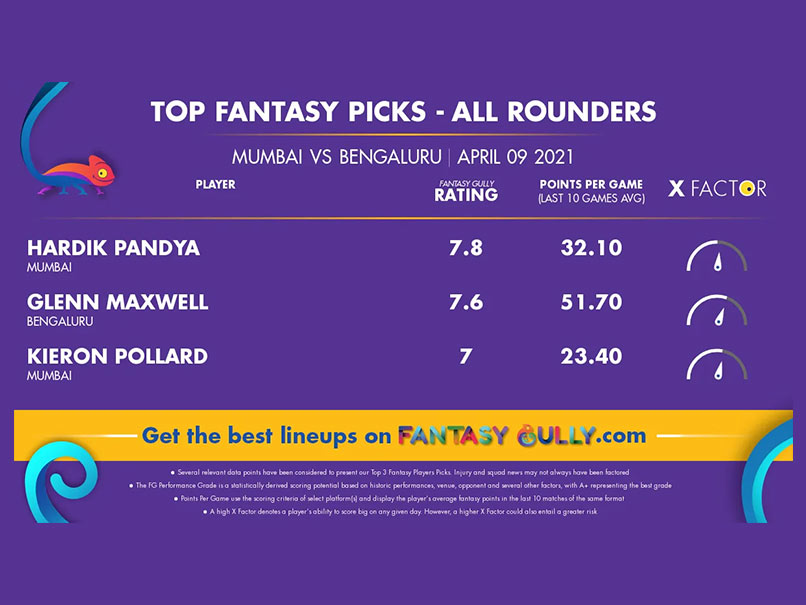 
Top Fantasy Picks – All Rounders for Mumbai vs Bengaluru

Hardik Pandya in the recent India-England T20I series scored 86 runs in five matches at a strike rate of 141 and took three wickets (economy of 6.94). This brings his performance to almost 35 points per match which is pretty good for an all-rounder.

Earlier in Australia, he put up a good show with the bat as he scored 78 runs in 3 T20I matches at a strike rate of 156 and was named Player of the Series.

He bowled three to four overs in each of the 5 T20I matches vs England recently.

Overall, this means that if he gets to bat in the final overs he is surely going to get you some quick fantasy points.

Assuming he does bowl a minimum of 2-3 overs, there is a good chance of him getting the odd wicket and landing 25 fantasy points.

Glenn Maxwell has scored 89 runs and taken two wickets in his last three T20 matches and thus he is an in-form pick as he has contributed with both bat and ball in these matches.

He will most probably bat at number 3 or 4 and thus will have a chance to occupy the crease for a long time. Given that this match is in Chennai, his off break bowling can come in handy as Chennai favours the spinners and he can chip in with a wicket or two.

The Mumbai batsmen are surely going to go aggressive on Maxwell and this increases his chance of picking wickets and landing 1-2 wickets which can easily give you 50+ fantasy points.

Kieron Pollard has a great record against Bengaluru in the IPL (537 runs scored at an average of 41 and strike rate of 167) and 11 wickets taken in 23 matches which accounts to almost 40-50 fantasy points per match.

He does bat with a higher strike rate in most of his matches and thus extra fantasy points can be scored along with point bonuses in the form of fours and sixes.

If the top order fails to deliver for Mumbai, Pollard can change the course of the game in no time even if he gets to play 15-20 balls, he can score 35-40 runs which can account for almost 55-70 fantasy points.