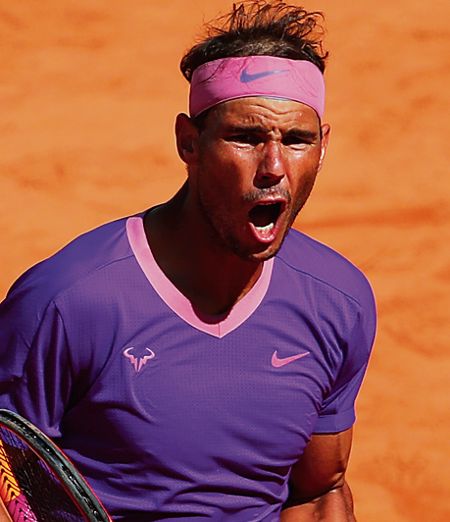 Rome: Rafael Nadal booked a spot into his 16th quarterfinal at the Italian Open in dramatic fashion, having to save match points and rally from a set down in a three-and-a-half hour epic against 13th seed Denis Shapovalov. Nadal won 3-6 6-4 7-6(3).

All four Indian golfers in action, including Shubhankar Sharma and Ajeetesh Sandhu, endured a disappointing opening round at the British Masters. Sharma (73) was the best among the Indians at Tied-70, while Sandhu (74) was T-94 as the European Tour moved to the UK. SSP Chawrasia (75) was T-115 and Gaganjeet Bhullar (77) was T-140 after the first round.

Sports Minister Kiren Rijiju today announced financial support of Rs 5 lakh each for the bereaved families of former hockey players MK Kaushik and Ravinder Pal Singh, who recently lost their lives to Covid-19. Both Kaushik and Singh were a part of India’s 1980 Olympics gold-winning team.

The all-English Champions League final will be held in Porto with 12,000 fans from Chelsea and Manchester City, UEFA confirmed today. The May 29 showpiece was moved from Istanbul due to England imposing tougher pandemic travel restrictions on Turkey that would have prevented fans flying in.

Atletico Madrid homed in on the La Liga title with a 2-1 win over Real Sociedad yesterday to move four points clear at the top. Agencies