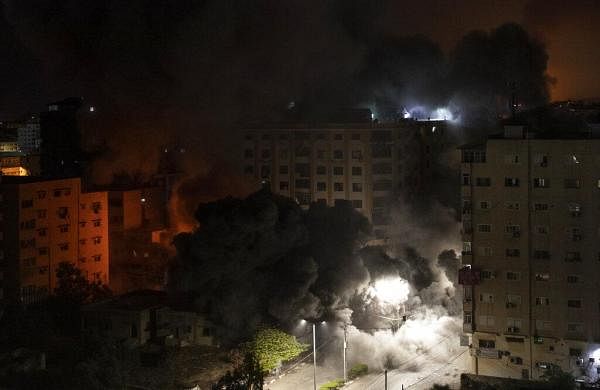 GAZA CITY: Rockets streamed out of Gaza and Israel pounded the territory with airstrikes early Wednesday as the most severe outbreak of violence since the 2014 war took on many hallmarks of that devastating 50-day conflict, with no endgame in sight.

Gaza’s Hamas rulers and other militant groups have fired barrages of hundreds of rockets that at times have overwhelmed Israel’s missile defenses, causing air raid sirens and explosions to echo across Tel Aviv, Israel’s biggest metropolitan area, and other cities.

Israeli airstrikes have leveled two apartment towers in the Gaza Strip, where 2 million Palestinians have lived under a crippling Israeli-Egyptian blockade since Hamas took power in 2007. Warning shots have allowed civilians to evacuate the buildings, but the material losses will be immense. Israel faced heavy criticism over the tactic during the 2014 war.

The death toll in Gaza rose to 43 Palestinians, including 13 children and three women, according to the Health Ministry. Nearly 300 people have been wounded, including 86 children and 39 women. Five Israelis, including three women and a child, were killed by rocket fire Tuesday and early Wednesday, and dozens of people were wounded.

The Israeli military said militants have fired more 1,050 rockets since the conflict began, with 200 of them falling short and landing inside Gaza. The military said it also shot down a drone that entered Israel from Gaza. Lt. Col. Jonathan Conricus, a military spokesman, said two infantry brigades were sent to the area, indicating preparations for a possible ground invasion.

Samah Haboub, a mother of four in Gaza, said she was thrown across her bedroom in a “moment of horror” by an airstrike on an apartment tower next door. She and her children, aged 3 to 14, ran down the stairway of their apartment block along with other residents, many of them screaming and crying.

“There is almost no safe place in Gaza,” she said.

The destruction of apartment towers was among several tactics used during the 2014 war that are now the subject of an investigation by the International Criminal Court into possible war crimes. Israel is not a member of the court and has rejected the probe.

In a brief statement, ICC prosecutor Fatou Bensouda said she had noted “with great concern” the escalation of violence in the region and “the possible commission of crimes under the Rome Statute” that established the court.

Conricus said Israeli forces have strict rules of engagement and follow international laws on armed conflict. “We are definitely very mindful of civilian casualties in Gaza and we want to minimize them,” he said. “That’s the priority.”

The latest eruption of violence began a month ago in Jerusalem, where heavy-handed police tactics during the Muslim holy month of Ramadan and the threatened eviction of dozens of Palestinian families by Jewish settlers ignited protests and clashes with police. A focal point was the Al-Aqsa Mosque compound, a site sacred to Jews and Muslims.

Israel and Hamas have fought three wars since the Islamic militant group seized power in Gaza from rival Palestinian forces in 2007. The conflicts ended after regional and international powers convinced both sides to accept an informal truce.

While the violence has been widely condemned, there is no sign that either side is willing to back down. Prime Minister Benjamin Netanyahu has vowed to expand the offensive, saying “this will take time.”

Still, diplomats are seeking to intervene, with Qatar, Egypt and the United Nations working to deliver a cease-fire.

The U.N. Security Council also planned to hold its second closed emergency meeting in three days Wednesday on the escalating violence. Council diplomats, speaking on condition of anonymity because discussions have been private, said the U.N.’s most powerful body did not issue a statement because of U.S. concerns that it could escalate tensions.

The unrest in Jerusalem has spread across Israel itself, with an outbreak of communal violence in mixed Jewish-Arab communities, as Hamas has called for a full-scale Palestinian intifada, or uprising. The last such uprising also began with violence at the Al-Aqsa Mosque, in 2000, and lasted more than five years.

An Associated Press journalist at a hospital in Gaza City saw five dead and seven wounded, including women, from an Israeli airstrike that hit a car in the city. 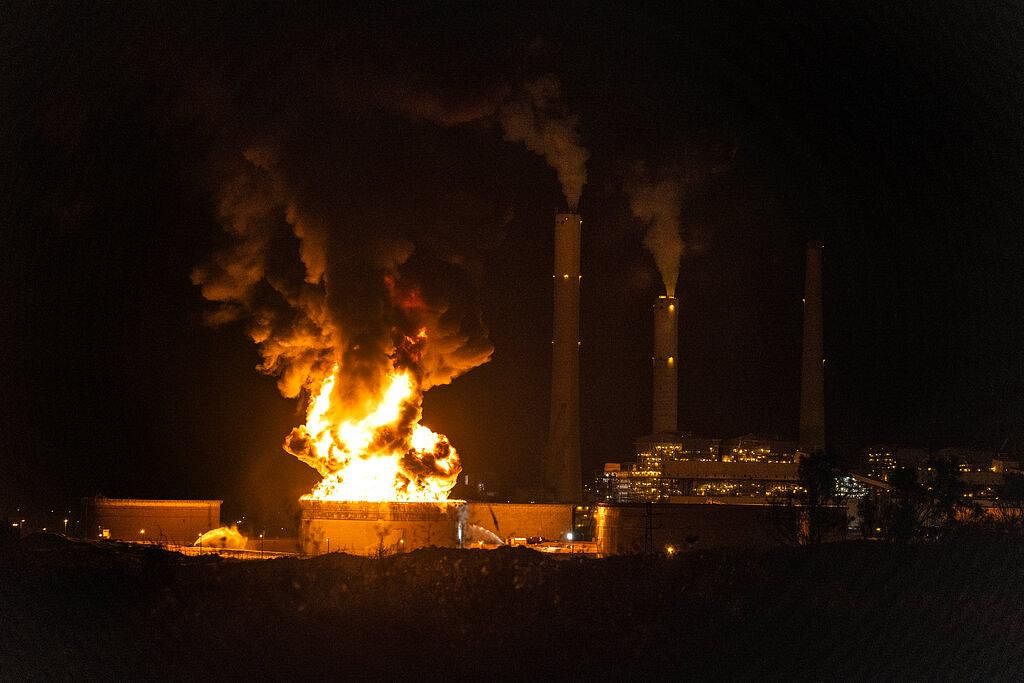 On Wednesday, Gaza militants fired an anti-tank missile across the border, killing an Israeli and wounding two others, who were evacuated under fire, according to Eli Bein, head of the Magen David Adom emergency service. It was not immediately clear if they were soldiers or civilians.

In the Israeli city of Lod, a 52-year-old man and his 16-year-old daughter were killed early Wednesday when a rocket had landed in the courtyard of their one-story home. Their car parked outside was wrecked and the interior of the house was filled by debris. The deceased were reportedly Arab citizens of Israel.

Lod also saw heavy clashes after thousands of mourners joined a funeral for an Arab man who was killed the previous night, the suspect a Jewish gunman. The crowd fought with police, and set a synagogue and some 30 vehicles on fire, Israeli media reported.

“An intifada erupted in Lod, you have to bring in the army,” the city’s mayor, Yair Revivo, said. Authorities have declared a state of emergency and ordered the redeployment of paramilitary border police companies from the occupied West Bank as reinforcements.

On Monday evening, Hamas began firing rockets from Gaza. From there, the escalation was rapid.
In a televised address, Hamas’ exiled leader, Ismail Haniyeh, said Israel bore responsibility. “It’s the Israeli occupation that set Jerusalem on fire, and the flames reached Gaza,” he said.

Hamas has not commented on Israel’s claims that it has killed a number of senior militants. Militant group Islamic Jihad confirmed that three senior commanders were killed in a strike on their hideout in a Gaza City apartment building.

The Israeli military on Wednesday released footage of an airstrike on what it said was the house of a “high-ranking operative” in Hamas, where weapons were stored. Earlier, the military said it struck a building where two senior members of Hamas’ military intelligence wing, were present. Hamas activists tweeted that the two were killed in the strike, along with a woman and her son.

Netanyahu said Israel had attacked hundreds of targets. The fiercest attack was a set of airstrikes that brought down an entire 12-story building. The building housed important Hamas offices, as well as a gym and some start-up businesses. Israel fired a series of warning shots before demolishing the building, allowing people to flee and there were no casualties.

responsible for planning attacks on Israeli targets in the occupied West Bank.
Fighter jets struck the building again after journalists and rescuers had gathered around. There was no immediate word on casualties. The high-rise stood 200 meters (650 feet) away from the AP bureau in Gaza City, and smoke and debris reached the office.

Soon after the bombing, Hamas announced that it would resume its attacks, and fired 100 rockets at the Israeli desert town of Beersheba. Hamas said the renewed barrage was in response to the strike on the building.

Powar back with women’s team