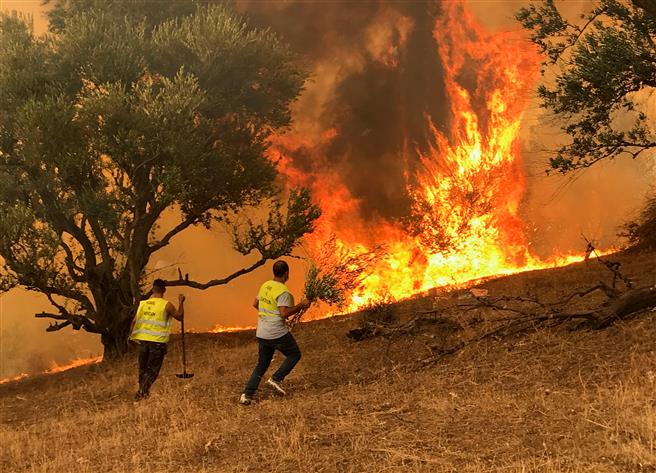 An Algerian prosecutor has ordered an investigation into the death of a man who was killed by a mob after being accused of setting fires that devastated the region, Algeria’s official APS news agency said.

Wildfires in Algeria have killed at least 69 people through the mountainous Berber region.

The killing took place in Larbaa Nath Irathen, in the Tizi Ouzou district, one of the worst hit by the fires. The victim was identified as 38-year-old Djamel Ben Ismail.

The local prosecutor issued a statement carried by APS on Thursday “following videos on Wednesday on social media showing the killing of a citizen (burned to death and beaten).”

He ordered an investigation into the case with the aim of identifying the assailants and sending them to trial “so that the odious crime does not go unpunished”.

The statement said a crowd violently attacked the police station where the victim was under protection from officers and managed to remove him. They “dragged him outside, beating and burning him, which led to his death”.

“Police officers who intervened to protect and help the victim have also been injured,” the statement said.

Amnesty International called on Algerian authorities to immediately investigate the death and “send a clear message that this violence won’t go unpunished”.

“Do you realise, even dead they tortured him?” Mohamed Khalfi, Ben Ismail’s maternal uncle, told The Associated Press. “And what hurts me is that the people filmed. … I am his uncle and I ask that justice do its job and that even those who watched without doing anything be judged.”

One of Ben Ismail’s friends, Rafik, who did not provide his last name, said he was “an artist, a young man who loves the guitar and loves life… not a violent man”. AP

Government Notifies Continuation of Scheme for Rebate of State and Central Taxes and levies on Export of Apparel/Garments and Made-ups;

Over 2,000 convicts to be released on special parole