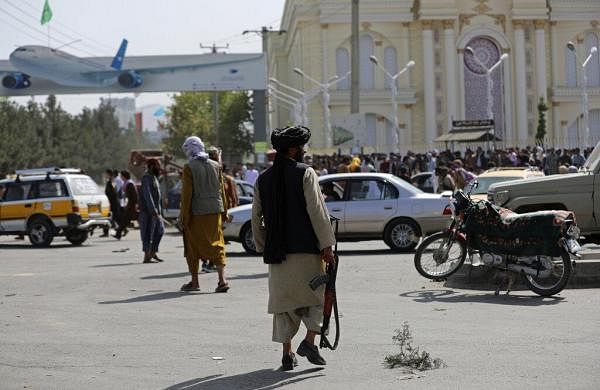 Five people died in the chaos at Kabul Airport on Monday, as people dashed to exit the fallen city a day after the Taliban seized the Afghan capital, news agency Reuters reported.

Though it was not immediately clear how the victims died, a US official said that troops had fired shots in the air to discourage people who were trying to enter a military flight that was set to fly out US diplomats and embassy staff.

Commercial flights from Kabul were cancelled after chaotic scenes at the airport with thousands looking for a way out.

“There will be no commercial flights from Hamid Karzai Airport to prevent looting and plundering. Please do not rush to the airport,” the Kabul airport authority said in a message sent to reporters.

Thousands of Afghans, fearing a return to the Taliban’s brutal rule, are trying to flee the country through Hamid Karzai International Airport. Videos circulating on social media showed hundreds of people racing across the tarmac as US soldiers fired warning shots in the air.

The Taliban swept into the capital on Sunday after the Western-backed government collapsed and President Ashraf Ghani fled the country, bringing a stunning end to a two-decade campaign in which the US and its allies had tried to transform the country.

CSIR-NIScPR Organizes National Conference (Virtual) on S&T in India: A Historical Introspection with a Contemporary Perspective

CSIR-NIScPR Organizes National Conference (Virtual) on S&T in India: A Historical Introspection with a Contemporary Perspective

GoAir rebrands itself as Go First