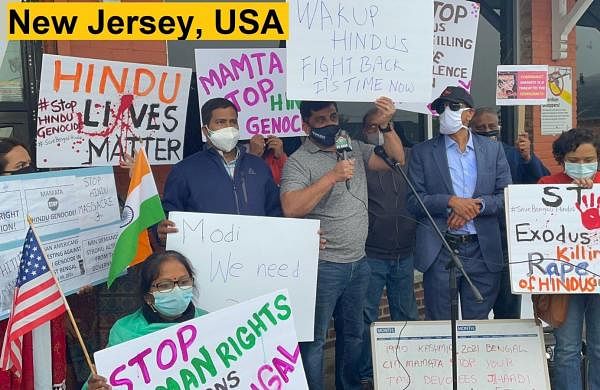 HOUSTON: Non-resident Indians, including the Bengali diaspora, have staged protests in more than 30 American cities, condemning the post-poll result violence in West Bengal.

Several incidents of violence were reported in West Bengal after the announcement of assembly poll results on May 2.

The BJP has alleged that its several workers were killed and many were injured by the Trinamool Congress (TMC) in the aftermath of the elections.

Judhajit Senmazumdar, a technology entrepreneur from Silicon Valley who frequently travels to Bengal, said the anguish felt by the diaspora was palpable.

“After the results were announced, my friends and I got frantic calls for help from people facing targeted attacks; shops were being looted and bombs were being thrown inside houses,” he said.

The anguish coalesced into a spontaneous protest in the major cities of the US, the UK and many other locations.

“The systematic annihilation of BJP workers and supporters in Bengal under the patronage of the West Bengal administration has the Bengali diaspora up in arms against Mamata Banerjee. Widespread protests across US, Canada, UK, Nigeria, Thailand, etc demanding #MamataStopViolence,” BJP’s West Bengal in-charge Amit Malviya tweeted on Sunday.

The protestors demanded “justice and a probe” into the widespread violence in West Bengal.

“My mind recoils at the manner in which Hindu women have been dragged by the hair, flung on the floor, battered and raped,” said Houston-based author Sahana Singh.

“I grew up in Kolkata and soaked in the culture of the Divine Feminine. So, I cannot fathom how a state with a woman at the helm of affairs can sanction such cruelty and vendetta against women simply due to differences of political opinion,” Singh said.

The BJP has blamed the Trinamool Congress (TMC) for the violence, saying its workers and sympathizers targeted the rivals.

“I had heard of the immense atrocities committed during the Partition, but I have never seen such post-poll violence that is occurring in West Bengal after the declaration of election results (on May 2),” BJP president J P Nadda said last week.

“We are committed to democratically fight this ideological battle and the activities of the TMC, which is full of intolerance,” he told reporters in Kolkata.

The BJP has claimed that at least six of its workers and supporters, including a woman, were killed in violence allegedly unleashed by the TMC.

The TMC has claimed that its three supporters have been killed in violent incidents.

Members of other parties, including the Left and the Congress, have also attacked the TMC for the violence in the state, which they said has been aimed at their members and sympathisers as well.

The TMC, however, has denied the charges.

Chief Minister Banerjee had earlier asked people to show restraint and not be involved in any form of violence.

Union Minister Dr. Jitendra Singh there will be 100% Vaccination for 45 plus by June end in Jammu and Kashmir