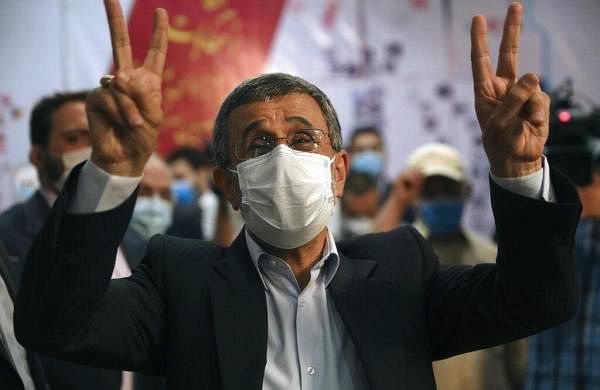 Mahmoud Ahmadinejad reportedly marched accompanied by supporters to a registration center at the Interior Ministry where he filled out registration forms.

Ahmadinejad in recent years has tried to polish his hardline image into a more centrist candidacy, criticizing the government for mismanagement.

The Holocaust-denying Ahmadinejad has previously been banned from running for the presidency by Supreme Leader Ayatollah Ali Khamenei in 2017, although then, he registered anyway. A constitutional watchdog, the Guardian Council ultimately disqualified him then.

Khamenei says he will not oppose the nomination of any candidate, although the electoral council may still block Ahmadinejad’s candidacy. In either case, the populist’s return to the political scene may energize discontent among hard-liners who seek a tougher stance against the west — particularly Israel and the U.S.

Iran opened registration on Tuesday, kicking off the race as uncertainty looms over Tehran’s tattered nuclear deal with world powers and tensions remain high with the West.
President Hassan Rouhani can not run again due to term limits, yet with the poll just a month away no immediate favorite has emerged among the many rumored candidates. There also appears to be little interest in the vote by a public crushed by sanctions and the coronavirus pandemic.

Nevertheless, many view the country’s hard-liners as ascendant — even as the U.S. under President Joe Biden tries to find a way to re-enter the atomic accord.
Whoever wins the June 18 vote will take over from Rouhani, a relative moderate within the Islamic Republic whose two four-year terms began with Iran reaching the nuclear deal. His time in office now draws to a close with the accord unraveled after the U.S. unilaterally withdrew from it under President Donald Trump in 2018.

Ahmadinejad pushed his nation into open confrontation with both the West over its nuclear program and its own people after his disputed 2009 re-election sparked the biggest mass protests since the country’s 1979 Islamic Revolution.

Abroad, he became a caricature of Western perceptions of the Islamic Republic’s worst attributes, such as denying the Holocaust, insisting Iran had no gay or lesbian citizens and hinting Iran could build a nuclear weapon if it chose to do so.

At home, however, the former Tehran mayor drew support from the countryside for his populist cash handouts and home-building programs. As his two-term presidency drew to a close and in his life after office, he also crossed the clear red line of Iran’s Shiite theocracy, directly challenging Supreme Leader Ayatollah Ali Khamenei, who has final say on all matters of state.

Ahmadinejad entered office in 2005 and left in 2013, after the election of President Hassan Rouhani, who would go onto to make the nuclear deal with world powers. Yet even out of office, Ahmadinejad sought to reinvigorate his political fortunes in public and on social media.