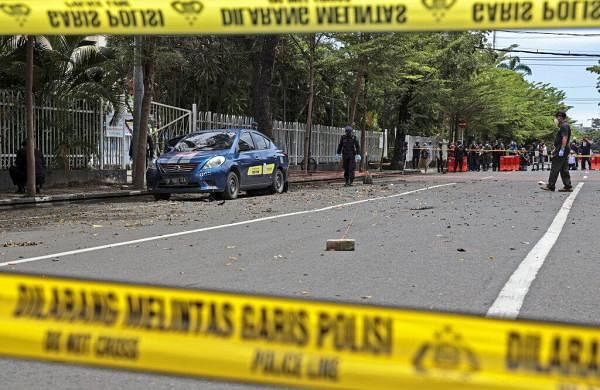 MAKASSAR (INDONESIA): Indonesian authorities on Monday identified a newly married couple with suspected militant links as the attackers who used a pressure cooker to blow themselves up outside a Roman Catholic cathedral during Palm Sunday Mass.

The attack wounded 20 people, including four church guards, and broke windows at the church and nearby buildings in Makassar, the capital of South Sulawesi province.

The couple married six months ago and police were still investigating at their house in Makassar, National Police spokesperson Argo Yuwono said. “Investigations are still being carried out including uncovering other perpetrators,” Yuwono said in a statement.

The attackers detonated their bombs when they were confronted by guards outside the church.

The couple were believed to have been members of Jemaah Anshorut Daulah, which has pledged allegiance to the Islamic State group and carried out a series of suicide bombings in Indonesia.

They included the 2016 Starbucks attack in Jakarta, which killed four civilians and four militants; an attack on a bus terminal in the capital that killed three police officers; and an attack on a church in Kalimantan that killed a 2-year-old girl a year later. Several other children suffered serious burns from the Kalimantan attack.

Indonesia’s last major attack was in May 2018, when two families carried out suicide bombings on churches in Surabaya, killing a dozen people including two young girls whose parents had involved them in one of the attacks. Police said the father was the leader of a local affiliate of Jemaah Anshorut Daulah.

One of the attackers in Makassar was believed to have links to a 2019 suicide attack that killed 23 people at Our Lady of Mount Carmel Cathedral in the Philippine province of Sulu, Indonesian National Police Chief Listyo Sigit Prabowo said.

He said the two attackers were linked to a group of suspected militants arrested in Makassar on Jan. 6, when a police counterterrorism squad shot and killed two suspected militants and arrested 19 others. The two men who were killed were being sought for their alleged role in the Philippine attack.

Prabowo said police on Sunday arrested four suspected militants believed to have links with the attackers in a raid in Bima, a city on Sumbawa island in West Nusa Tenggara province.

Local media reports said Indonesia’s elite police counterterrorism squad, known as Densus 88, made arrests in several places on Monday, including in Jakarta and its satellite city of Bekasi.

The attack a week before Easter in the world’s most populous Muslim-majority nation came as the country was on high alert following December’s arrest of the leader of the Southeast Asian militant group, Jemaah Islamiyah, which has been designated a terror group by many nations.

President Joko Widodo condemned Sunday’s attack and said it has nothing to do with any religion as all religions would not tolerate any kind of terrorism. He ordered police to “thoroughly investigate the networks of the perpetrators and hunt them to the roots.”

Indonesia has been battling militants since Jemaah Islamiyah carried out bombings on the resort island of Bali in 2002 that killed 202 people, mostly foreign tourists. Attacks aimed at foreigners have been largely replaced in recent years by smaller, less deadly strikes targeting the government, police and anti-terrorism forces and people militants consider as infidels.

Indonesia has seen several arrests since that in December of Jemaah Islamiyah leader Aris Sumarsono, also known as Zulkarnaen. Over the past month the country’s counterterrorism squad has arrested more than 70 suspects, including 19 in Makassar, following a tipoff about possible attacks against police and places of worship.

Jemaah Islamiyah was once considered the preeminent terror network in Southeast Asia, but has been weakened over the past decade by a sustained crackdown. In recent years, however, a new threat has emerged in militants who fought with the Islamic State group in Iraq and Syria and returned to Indonesia or those inspired by the group’s attacks abroad.

Over 1.5 lakh treated under Himcare