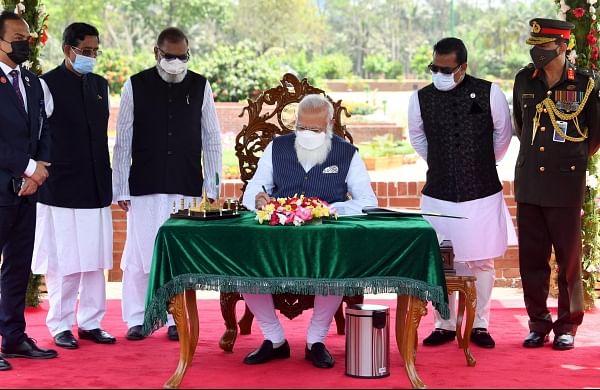 DHAKA: Prime Minister Narendra Modi on Friday visited the National Martyrs’ Memorial in Savar upazila, Dhaka and laid a wreath to commemorate the fallen freedom fighters of the 1971 Liberation War.

The Prime Minister had arrived at the Dhaka airport earlier today for his two-day visit to Bangladesh. He received a warm welcome from his counterpart Sheikh Hasina.

Accompanied by Bangladeshi military personnel and his personal security, the Indian Prime Minister laid a wreath to honour the lives of the martyrs who sacrificed their lives in the 1971 war against Pakistan.

He also signed the visitors’ book and planted a sapling during his visit to the National Martyrs’ Memorial.

“I pay my heartfelt tribute to the patriotic martyrs of Bangladesh, whose glorious sacrifices enabled the birth of this great nation. May every visitor to this revered ground honour the sacred memory of the millions who were slain but not silenced,” PM Modi wrote in the visitors’ book.

“Their valour will continue to inspire future generations to fight injustice and defend the cause of righteousness. On behalf of the people of India, I pray that the eternal flame at Savar remains a lasting reminder of the noble victory of truth and courage over deceit and oppression,” he further wrote.

The Prime Minister’s visit comes as Bangladesh is commemorating its 50th independence day.

On March 26, 1971, Bangladesh was proclaimed as an independent nation by Bangabandhu Sheikh Mujibur Rahman and this led to Bangladesh Liberation War when a guerilla war ensued between Pakistan and Bangladesh liberation forces with Indian support. After facing defeat in the 1971 war, the then Army Chief of Pakistan General Amir Abdullah Khan Niazi, along with his 93,000 troops surrendered.

Later on, PM Modi with speak to Bangladesh Foreign Minister AK Abdul Momen, after which he will attend the National Day Programme and then inaugurate Bapu Bangabandhu Digital Video Exhibition.

“Landed in Dhaka. I thank PM Sheikh Hasina for the special welcome at the airport. This visit will contribute to even stronger bilateral relations between our nations,” he tweeted.

PM Modi will call on Bangladesh President Abdul Hamid during the visit and will hold restricted delegation-level talks with his counterpart Hasina.

“This (PM Modi’s) visit will be of very special significance and will serve to highlight the celebration of very special and unique ties which reinforces comprehensive strategic ties with Bangladesh,” said Foreign Secretary Harsh Shringla during a media briefing on Wednesday.

The Prime Minister will also interact with diverse groups of Bangladesh’s polity and society. The visit comes at a momentous time in bilateral ties between two countries, Shringla added.

This is PM Modi’s first foreign visit since the COVID-19 outbreak.

Night curfew in Haryana from 9 pm to 5 am

Ileana D’Cruz: Getting into uncertain sphere pushes me to do better