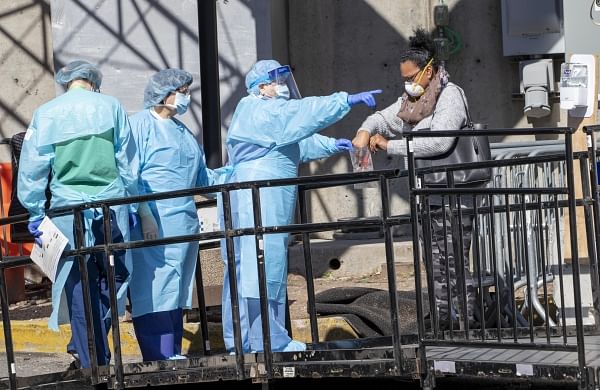 WASHINGTON: COVID-19 deaths in the U.S. have tumbled to an average of around 600 per day, the lowest level in 10 months, with the number of lives lost dropping to single digits in well over half the states and hitting zero on some days.

Confirmed infections, meanwhile, have fallen to about 38,000 day on average, their lowest mark since mid-September.

While that is still cause for concern, they have plummeted 85% from a peak of more than a quarter-million cases per day in early January.

The last time deaths were this low was early July, nearly a year ago.

COVID-19 deaths in the U.S. topped out in mid-January at an average of more than 3,400 a day, just a month into the biggest vaccination drive in the nation’s history.

Kansas reported no new deaths from Friday through Monday.

In Massachusetts, the Boston Herald put a huge zero on Wednesday’s front page under the headline:

“First time in nearly a year state has no new coronavirus deaths.”

Dr. Amesh Adalja, an infectious disease specialist at Johns Hopkins University, said that vaccinations have been crucial even as the nation struggles to reach herd immunity.

“The primary objective is to deny this virus the ability to kill at the rate that it could, and that has been achieved,” he said.

“We have in in effect tamed the virus.”

Nearly 45% of the nation’s adults are fully vaccinated, and over 58% have received at least one dose, according to the Centers for Disease Control and Prevention.

This week, Pfizer’s vaccine won authorization for use in 12- to 15-year-olds, in a move that could make it easier to reopen the nation’s schools.

The encouraging outlook stands in sharp contrast to the catastrophe unfolding in places like India and Brazil.

While health authorities have expressed concern about vaccine hesitancy and people letting down their guard, teams of experts consulted by the CDC projected in a report last week that new deaths and cases will fall sharply by the end of July and continue dropping after that.

Cautious is still needed, though, warned Justin Lessler, an associate professor of epidemiology at John Hopkins.

“I think we are in a great place, but I think India is an important cautionary tale,” Lessler said.

“If there is a right combination of vaccine hesitancy, potentially new variants and quickly rolling back control measures that comes together, we could potentially screw this up and have yet another wave that is completely unnecessary at this point.”

Oxygen Expresses deliver nearly 27600 MT of LMO to the Nation

Spain hopes to open doors to British travellers this month