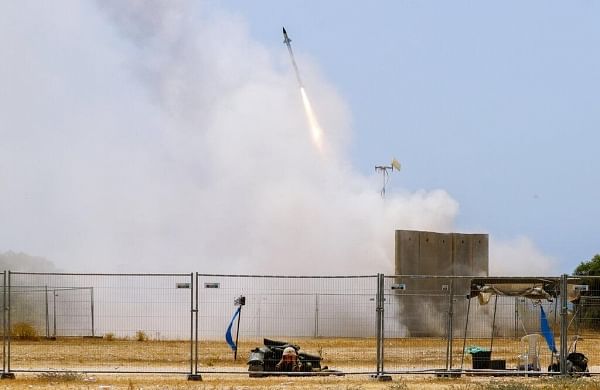 JERUSALEM: Israeli airstrikes have demolished a 12-story building in Gaza City that housed the offices of top Hamas officials.

Tuesday’s airstrikes shook buildings as far as 3 kilometers (2 miles) away. Israeli drones fired a series of warning shots at the roof to give people time to leave the building before it was destroyed by the military.

There were no immediate reports of casualties. But the airstrike marked another escalation in Israel’s offensive against Hamas.

Hamas earlier threatened to strike the Israeli metropolis of Tel Aviv if Israel continued striking buildings in Gaza. On Monday evening, a Hamas rocket fell on the western outskirts of Jerusalem, lightly damaging a home and causing a brushfire.

Israel’s police chief is beefing up deployments across the country in response to a wave of unrest in Arab communities.

Koby Shabtai issued the order on Tuesday as crowds set a police cruiser, motorcycle and bus on fire during protests in the central city of Lod. Protests were expected in dozens of other Arab communities across the country.

In a statement, police said Shabtai instructed his commanders “to intensify police presence on the streets” following widespread unrest and protests in dozens of Arab communities across the country Monday night.

The mounting unrest came at a time of heightened tensions following weeks of violence in Jerusalem and heavy fighting between Israel and Hamas militants in the Gaza Strip in the past day.

Earlier in the day in Lod, Israeli police fired tear gas and stun grenades after mourners started throwing stones at officers during the funeral of an Arab man allegedly killed by a Jewish resident in the area.

Gulf Arab countries are offering harsh criticism of Israel in the wake of the latest Israeli-Palestinian confrontation as violence rises in Jerusalem and the Gaza Strip.

Hundreds of Kuwaitis staged a sit-in outside Parliament, chanting “No to normalization” with Israel and voicing support for the Palestinians. Tuesday’s protest, which blocked traffic and drew outspoken activists, officials and lawmakers, comes as Gulf Arab sheikhdoms with new diplomatic ties to Israel increasingly condemn the escalation.

As part of the U.S.-brokered normalization agreements known as the “Abraham Accords,” the United Arab Emirates and Bahrain opened ties with Israel last fall, reversing the decades-long Arab policy of conditioning relations on a resolution of the Mideast conflict and drawing intense backlash from the Palestinians.

The de facto leader of the UAE, Abu Dhabi Crown Prince Mohammed bin Zayed, stressed “the importance of putting an end to all aggressions and practices that exacerbate tension and wrath in the sacred city” of Jerusalem. He discussed flaring Mideast tensions in meetings Tuesday with the Bahraini crown prince and Jordan’s prime minister.

Bahrain also renewed its criticism of the rising tensions, with the speaker of parliament affirming the kingdom’s support for a two-state solution and denouncing Israel’s “provocations against the people of Jerusalem,” including threatened home evictions and attacks in the Al-Aqsa Mosque.

Harsh condemnations also have poured in from regional powerhouse Saudi Arabia and the tiny state of Kuwait, which have traditionally considered themselves among the standard-bearers for the Palestinian cause.