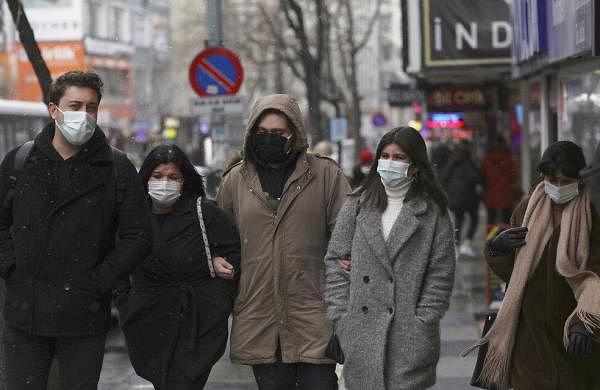 ANKARA: Turkey is reinstating weekend lockdowns in most of Turkey’s provinces and will also impose restrictions over the Muslim holy month of Ramadan following a sharp increase in COVID-19 cases.

Virus infections in Turkey have soared less than a month after the country divided its 81 provinces into four color-coded categories and relaxed restrictions in some provinces under a “controlled normalization” effort. The number of confirmed daily infections has since almost tripled to around 30,000, matching the record numbers that were reported in December. The country is also reporting around 150 deaths per day, up from around 65 at the start of the month.

In a televised address following a Cabinet meeting late Monday, President Recep Tayyip Erdogan said 58 out of Turkey’s 81 provinces, including Istanbul and Ankara, were now designated as “red” or “very high-risk” areas and would be subjected to lockdowns on both Saturdays and Sundays. Nighttime weekend curfews across the country would continue, he said.

Nighttime curfews that are in place across the country would continue, he said.

Only 17 provinces were in the “red” category on March 2, when schools partially resumed face-to-face education, cafes and restaurants were allowed to operate at half-capacity and weekend curfews were eased in several cities.

“We will have to make some sacrifices during the month of Ramadan,” he said, adding that restaurants and cafes would be allowed to serve takeout food only during the holy month, which starts on April 13 in Turkey.

Mass gatherings for Ramadan meals held before sunrise and after sunset would be barred, he also announced.

Erdogan has come under intense criticism for holding his ruling party’s congresses inside packed sport complexes across the country, despite a new surge of COVID-19 cases. He has been accused of double standards for disregarding the government’s own social distancing rules. In one such event, Erdogan boasted about the size of the crowds.

On Monday, the country reported around 32,400 infections. The total number of cases in the country since the start of the outbreak last year stands at more than 3.2 million. The COVID-19 death toll has reached more than 31,000.

Turkey rolled out its vaccination program in January. More than 15 million shots have been administered so far. Around 6.7 million people have received two doses.

Vaccination drive at High Court in Shimla, 200 get jab